So here is the thing; no matter how amazing you are (and you are amazing my precious) at some point you will be subjected to some or all of the excuses on this list. Yes all men have

a list. Excuses they will use when they mess up or want to break up. These excuses are passive aggressive as they are designed to sooth your ego and make you feel good about being dumped or cheated on. This doesn’t work as what you really want to know is the real reason they are leaving. Let me break it down for you. He is leaving to pursue other women. That is the reason. Not because you aren’t enough but because his love of new conquests is probably like my love of chocolate – eternal.

If you hear any of these then know that it’s time to grab your purse and run because somewhere along the way he decided you weren’t worthy of being honest to or he has convinced himself that you can’t handle the truth. you’re a hysterical woman. Oh and be warned the other woman is probably already in the vicinity. My money is on an ex or someone at the gym or work. Rarely does a man dump a woman to be by himself. Who is going to sooth that massive ego and stroke that cock?

You pursued me. I was happily living my life as a singletini then you came along with your talk of marriage and babies wrapped up in a need for us to be exclusive. I was perfectly happy to date you as well as many others but nooooooo you wanted it all. So why did you start something if you aren’t ready? Is this a dummy run? Are you trying to ensure that your mack game is tight so that when you are ready it flows seamlessly? This one usually comes after sex but before any ring has been bought. Maybe the prices at De Beers told him that he wasn’t ready.  Worse though is when they have introduced you to their kids and family. When you are at his Uncles 60th pretending to help in the kitchen then I’m thinking he better be ready!

This is really code for ‘I was ready but then someone else has entered the space and is offering me sex without strings’. He wants in. Get out my precious.

This was my favourite breakup line ever used. So I deserve better than you can give and yet you have only just come to this realisation after months of dicking me about. I suspect this one is really saying I don’t fancy you anymore but don’t want to say it and look like an arsehole. The most pivotal moment in my life is when an ex finally admitted he didn’t love me and never really had. This came after 6 months of me questioning him and finally he caved under the persistence. Yes no one likes hearing it but it was the truth and allowed me to go forth and date many more men. Hmmm, I don’t know whether I should thank him or put a hit out on him. To be decided at a later date.

Well isn’t this peachy. You’re managing your addictions now? My issue is you have wasted our

time for however long and now think it’s best to pull back before you fall in love? One guy I wasn’t even dating compared me to M&S biscuits. I think I was supposed to be impressed. But no this tells you that the person doesn’t want a diet of just M&S biscuits and instead has grabbed a trolley and is filling it up with all sorts of desserts.

Then stop sleeping over, eating all my food and have a spare change of clothes here dude! It’s only been a year of this shite.I don’t get this one.  Too soon for what exactly? Again I think just a case of too soon for him to commit to one brand of biscuits.

So you slept with her? Yes, that’s going to deter her from her course. According to the male of the species there is a tribe of women who hunt men and are relentless in their pursuit of their cock. I am yet to come across these women as they are elusive but all men have met them and used them to explain tripping and falling into her, dick first.

Forget Ms Independence my precious. Chances are he will leave you for a woman who is more dependent. Somehow they find this attractive even though they will tell you that they love you for your strength and independence. They don’t. It makes them feel redundant. So best you do what we all do and fake the odd vulnerability. NEVER ever fix anything in your flat. Call him. Don’t squash that spider. Call him. And if you are brave enough to have a car then make sure he takes it to the place where they do weird things to cars and charge lots of money. He’ll feel loved and needed. You can catch up on your web series watching.

I had one who wasn’t ready for something serious or kids but loved my independence. His next woman had kids, no real career and spent all her time clinging off him in clubs. Now you know I love me a public snog or 10 but this was like an audition for a sex video. He loved it and they are still together. He’s even been generous enough to impregnate her. So sweet.

Finally we agree on something but, we’re willing to work with you regardless. That’s us compromising for the sake of the relationship. See how lovely we are to you, the undeserving?

I wouldn’t mind this one so much if it came 2 weeks into dating when they have realised how fabulous you really are but no, it’s months or years later before the light bulb goes off and they realise how unworthy they really are.

Here’s the thing, you may not be good enough dudes but this is a chance for you to man up and get there instead of limping out because you want someone else. LAME!

If only this man knew that any woman worth her weight in salt (and I’m not light) will help you earn more money not less. Yes, yes we will help you spend it too but what’s the point of all that money when there are shoes to buy?

Any man that uses work or business as an excuse not to be with you clearly sees dating as work. It isn’t. If done properly then dating can be play. So much fun can be had in between you making your money.

Now that you have trained me into a super dating machine and lover I need space to chase all the women that need to feel the might of Thor. That’s what he called it. Don’t ask. It was more thin than Thor but who am I to ruin the role play ;).

Realising that no excuse sounds pathetic enough to get them out of there without feeling guilty some take the cowardly option and just disappear. One never turned up to my birthday party….3 years ago and I haven’t heard from him since. Another left me ordering cup after cup of peppermint tea in a restaurant. There is something almost sinister about the disappearing act because it means to them they don’t even think you warrant a lie. They’ll argue it is because they respect you too much to lie but I can but disagree.

So there you go my 10 weak arse excuses that men make. I wonder if there are any genuine excuses for ending a relationship that men use? If so I’ve never really heard them

P.S. If he uses any of the above excuses please note that this means that any friends privileges are revoked. He clearly doesn’t think enough of you to warrant you listening to his tales of other women or work issues. 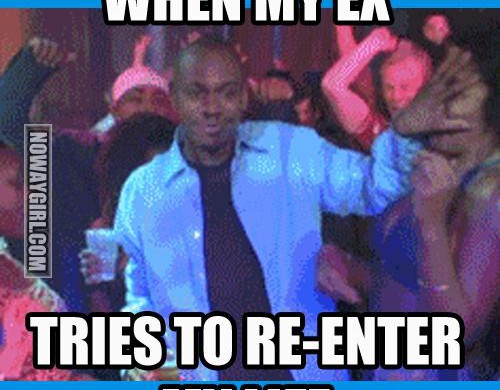 The phone rang and it was a private number. I braced myself. Yes I knew that it could be a[...]

A-Sexy: C is for cock blocker part 2 I’ve already written about this not so rare species in The Bitch[...]

Stupid Questions men ask part 2 Can we still be friends after sex? I had this one the other night[...]