I don’t want to sit on your face 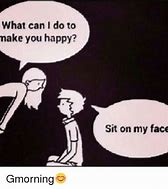 I don’t want to sit on your face!

Here’s the thing: Most men suck at getting new sex. We know this because scrolling through dating apps reveals their frustrations. i.e. No Timewasters or Long conversations. By Long conversations they mean more than 2 messages. Serious applicants of NSA (No strings attached)only. Add to all that the  restrictions of covid and some of you are digging deep into the phone and social media archives to try and wet that wick. So here’s a suggestion from me to you; maybe don’t lead with ‘I’ll let you sit on my face’?

This has happened to me twice now. I’m having an innocent conversation with a male friend and he drops this clanger.

The first time made no sense to me as he knew he wasn’t getting any but was drunk and spiteful. I promptly ignored him and moved him into acquaintances.

The second time was an old friend who called me out of the blue. We had what I considered to be a lovely catch up on our lives. He asked me if I was cooking a roast for my man and then proceeded to tell me that he was there for me in any way I needed and  that I could sit on his face

Men think this is the ultimate in gifts. An act which is all about her and not him. It’s bizarre.

I get it I’m supposed to be impressed by this willingness to risk his life.  That this selfless act doesn’t involve his penis (this is a lie by the way as most push your back until you’re 69ing them as the lack of dick participation makes some. men anxious. If you LIKE face sitting then I suggest you do it in cowgirl facing away from his dick Be selfish. 😉 ). Also it means he’s not saying stupid shit that will annoy you during sex and looking for reassurance that he’s the man. He’s just the man right now. Bless

But the reality I don’t want to sit on a face. I’m sat there thinking, I don’t need a dude to die in my flat and I have to now deal with all sorts of questions as to why I sat on his face, for how long with how much weight etc. Manslaughter is not the way I see my life going! I look terrible in prison colours and jump suits with this arse? It’s not my future.

I don’t know what Steve Harvey or any of those other gurus told you but, this is a high risk strategy and unlikely to get you the win.

Be creative  / Don’t be a dick

But sex you want an sex you will continue to pursue. My advice? Women are simple creatures and we really just want a dude that wants sex but isn’t ALL about the sex. Trust me. You can’t go straight in there with let’s fuck unless you know she’s only after the dick. All that said, can we stop leading with the phrase ‘I’ll let you sit on my face’? Try a Netflix and chill approach. Or the not so commonly used art of dating and getting to know the person before you get into the panties. Women are actually that easily impressed.

Thank you, stay blessed and alive

This is a sex date so be warned. Every once in a while the internet dating gods deem you worthy[...]