Who should pay on a date

So recently a friend online asked the question that has been baffling the sexes since the 90s. Who should pay on a date?

I went on a string of dates on which wastemen expected me to pay. I paid and went home never to see them again. Did I expect them to pay for my drink or dinner? No. But I didn’t expect to pay for theirs either. Unless you specify that you are taking me out I’m an advocate of, ‘we’re both working adults’ and can pay for ourselves. Despite not drinking I’m even happy for us to go halves because I will be ordering more than a side dish. I eat!

However these are a changing times and with the advent of apps and the internet dating has changed. It is now even more transactional than ever before and paying for dinner is deemed foreplay for some. It’s dinner. We both wanted to eat.

So despite changes in the practises the etiquette is thus:

Tinder or any app date : Do drinks only. Get your own before you sit down at the table. If there is a chance of sex then generally he’ll pay for drink two, offer to extend to dinner and pay the uber home. He’s paying for sex. Be warned. He’ll want to collect.

Plenty of Fish and free sites: Go Dutch. The sheer volume of dates mean that he’s not that invested in any date no matter the number of messages exchanged.

Match / Eharmony : He pays – a demonstration of investment into your future. Yes he’ll probably try to get his leg over and fuck his investment before any further investment. But he’ll be subtler about it.

First Dates : The TV show gives them a budget and yet still the rule is he pays – a demonstration of chivalry and that romance isn’t dead. It is. The internet killed it.

Go dutch if you are serial daters but if he’s a colleague or friend who is trying to get out of the friendzone then, he pays.

Realistically speaking we are all adults and if, at the end of the date one person offers to pay for you then graciously accept it and keep it moving. Don’t accept if you have no plans of seeing them again as they’ll just get bitter and start calculating the cost of dating. Mine was about £60 a date without travel, salons, clothes.

If you think you deserve to be treated then know that you’re treating dating as transaction. Any well raised woman does the reach (for the purse) whether he offers or not. That way his ego is salved, like ‘Phew! She’s not taking the piss.’ The purse may be empty but that’s nobody’s business but hers.

Hope that helps. I’m off to watch First Dates. The romantic in me just won’t die 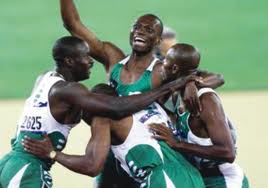 Summer of Nigistence Now I complain about Nigistence a lot. I know but there is a reason my precious.  West[...]

A lot of you ask me what is Nigistence and so I’ve taken the time to explain. The art of[...]