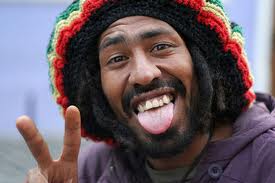 So yesterday I was wondering around in Soho looking for someone’s birthday drinks. I love Soho but apart from Wardour St (Mr Jerks), Old Compton St (Late night Balans) and Frith Street (Nandos) I never really know where I am. So I’m walking along hoping to find it when I see a man in a van banging on his window at me. Oooh a working man. He must know.

The guy is in his 50s, rasta and seems overly excited that I’m coming over. He rushes to put the keys in the ignition so he can wind down the window. Seriously I’ve never seen a man so surprised at his bad attempt to get my attention working .

I ignore this and I ask him if he knows where Brewer Street is.

I don’t know but I know someone who does?

Oh dear, this is going to be one of those let me take you to such and such and before I know it it’s a 3sum with him and his mate Paul with the pot belly and halitosis. I’m not going there….again.

So I take a step back and he reaches over to pull out his….Tom Tom. Ok I let my imagination get away with me. To be fair my precious either were possible.

He asks me again where I’m going and he puts it into the Tom Tom. The Tom Tom however is in patois. Everytime he keys something it tries to tell him to turn around nuh or you’ll shit yourself and phrases like “Cha! A wah dis”

(My precious excuse my patois it is not my mother tongue.)

So then he’s trying to figure it out. All the time I’m thinking he’s the worst person I could have asked. So whilst he’s furiously pressing buttons he remembers his original reason for banging on the window.

Tom Tom: So where you from ?

Tom Tom: Ah that’s not far from me

Me: [Tight smile silence/ look intently at the tom tom]

Tom Tom: So where your parents from

Me: I don’t know I’m adopted

Tom Tom: Oooh your adopted. [Like this is a positive thing and he’s never met anyone adopted before]

Tom Tom: You’ve got a strange accent…..you aren’t Caribbean are you

Me: No I’m African

At this juncture we are interrupted by the Tom Tom. “Eh wah you doin? Turn around before you shit yourself.” I look at him and he looks at me and we laugh.

Tom Tom: So you in a relationship

Me: Hmmmm, and how many kids do you have

Tom Tom: So this man of yours does he treat you right

Me: He treats me like a princess [l think of my lekky blanky at home waiting for me]

At this stage the tom tom is shouting at us for being stupid and not turning the car around. I decide it’s time for me to leave but before I do he’s stepped out of the car is and walking towards Romilly stret carrying the tom tom whilst it shouts at him. This isn’t working. I have a vague recollection that my favourite sex shop is on Brewer street so I do know how to get there.

Tom tom tells me to take the Tom Tom and then post it back to him. I tell him thank you but I’ve got this. He pays me a compliment and I thank the 3 minute make up job on the bus.

I think what I like about Tom Tom is that he’s just an old guy wanting to make his evening pass quicker. If I’d told him that I wanted a quickie in the back of his van he would have run a mile bless…so he was safe from me. But it tickled me

BFI review I have to start by saying that I don’t care that the BFI are a charity or that[...]

You still don’t have kids!! I called an old friend last week after 2 years of no contact. Like me[...]