Mr Marcus and the syphilis

So imagine my horror today when I read about Mr Marcus getting jail time for having ‘the syphilis’.

Wait no, that’s not right. It’s not illegal to have syphilis. What’s illegal is being the dumbass that altered documents that said you had it to trick others in the industry into thinking you didn’t have it so that you could carry on working. And how badly were they altered that people could tell? What did he use, a crayon?

Who is Mr Marcus?
Let’s rewind. Mr Marcus has always been the cheeky chappy of the BBC pack. He has this endearing smirk and keeps his socks and sneakers / timberlands on unnecessarily. You’ve gotta love someone for not taking it all too seriously.

STD. What idiot does that? Initially I was going to march outside the courthouse because I assumed that he was just being penalised for contracting it but no, he decided that he wasn’t infectious to others so he was going to infect others. I await the civil case because the 2 women in question don’t look like they’re going to let this one die down without some compensation despite being syphilis free. So, no more Mr. Marcus for me.

And what of the responsibility of the industry? Surely by now they should have their own system for ensuring that people are being honest instead

And, I would like to take this opportunity to remind men that no matter how crusty your feet, say no to sex with your boots on. I’ve never met anyone that told me they find that sexy. No really, never!

Sex Lies and Rinsing Guys. TV show on rinsing guys.  Being self-employed is a pain in a recession and I’m[...]

After a series of bad internet dates  I had given up on dating. I had instead become obsessed with finding[...] 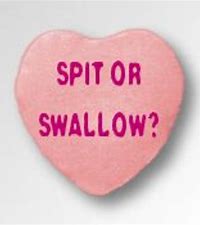 Spit or Swallow Etiquette It’s Sunday and I’m feeling somewhat philosophical. And so it’s time for the old age existential[...]